About University of Sydney Foundation

In 2018-19, the QS World University Rankings ranked Sydney as one of the world’s top 25 most reputable universities, and its graduates as the top 5 most employable in the world and first in Australia.

Five Nobel and two Crafoord laureates have been affiliated with the university as graduates and faculty. The university has educated seven Australian prime ministers, two governors-general of Australia, nine state governors and territory administrators, and 24 justices of the High Court of Australia, including four chief justices. Sydney has produced 110 Rhodes Scholars and 19 Gates Scholars. In 1848, in the New South Wales Legislative Council, William Wentworth, a graduate of the University of Cambridge and Charles Nicholson, a medical graduate from the University of Edinburgh Medical School, proposed a plan to expand the existing Sydney College into a larger university. Wentworth argued that a state secular university was imperative for the growth of a society aspiring towards self-government, and that it would provide the opportunity for “the child of every class, to become great and useful in the destinies of his country”. It would take two attempts on Wentworth’s behalf, however, before the plan was finally adopted.

The university was established via the passage of the University of Sydney Act, on 24 September 1850 and was assented on 1 October 1850 by Sir Charles Fitzroy. Two years later, the university was inaugurated on 11 October 1852 in the Big Schoolroom of what is now Sydney Grammar School. The first principal was John Woolley, the first professor of chemistry and experimental physics was John Smith.[13] On 27 February 1858 the university received its Royal Charter from Queen Victoria, giving degrees conferred by the university rank and recognition equal to those given by universities in the United Kingdom.By 1859, the university had moved to its current site in the Sydney suburb of Camperdown.

In 1858, the passage of the electoral act provided for the university to become a constituency for the New South Wales Legislative Assembly as soon as there were 100 graduates of the university holding higher degrees eligible for candidacy. This seat in the Parliament of New South Wales was first filled in 1876, but was abolished in 1880 one year after its second member, Edmund Barton, who later became the first Prime Minister of Australia, was elected to the Legislative Assembly.

The main campus has been ranked in the top 10 of the world’s most beautiful universities by the British Daily Telegraph, and The Huffington Post, among others such as Oxford and Cambridge and is spread across the inner-city suburbs of Camperdown and Darlington.

Originally housed in what is now Sydney Grammar School, in 1855 the government granted land in Grose Farm to the university, three kilometres from the city, which is now the main Camperdown campus. In 1854 the architect Edmund Blacket accepted a senate invitation for the first buildings to be designed. In 1858 the Great Hall was finished, and in 1859 the Main Building was built. He composed the original Neo-Gothic sandstone Quadrangle and Great Tower buildings, which were completed in 1862. The rapid expansion of the university in the mid-20th century resulted in the acquisition of land in Darlington across City Road. The Camperdown/Darlington campus houses the university’s administrative headquarters, and the Faculties of Arts, Science, Education and Social Work, Pharmacy, Veterinary Science, Economics and Business, Architecture, and Engineering. It is also the home base of the large Sydney Medical School, which has numerous affiliated teaching hospitals across the state.

The main campus is also the focus of the university’s student life, with the student-run University of Sydney Union (once referred to as “the Union”, but now known as “the USU”) in possession of three buildings – Wentworth, Manning and Holme Buildings. These buildings house a large proportion of the university’s catering outlets, and provide space for recreational rooms, bars and function centres. One of the largest activities organised by the Union is Welcome Week (formerly Orientation Week or ‘O-week'[48]), a three-day festival at the start of the academic year. Welcome Week centres on stalls set up by clubs and societies on the Front Lawns. 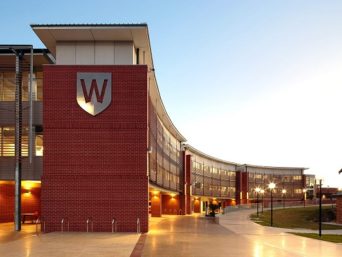